The Arctic is loosing ice , by 2050 it is expected to be ice free, and this could have a massive effect on the planet, such as floods increase, even some land being lost to the sea.

New studies have found how each additional metric ton of CO2 that’s released into the atmosphere  directly results in a 3 square meter loss of sea ice cover, during summer season.

Scientist from the max Planck institute for meteorology in hamburg stated:

“For the first time now, it is possible to grasp how each one of us contributes to tangible consequences for the global climate system”

So how does the CO2 really effect the globe warming, well its pretty simple, what happens is, concentrates of CO2 in the atmosphere strengthens the greenhouse effect, the heat from earth sends heat to space however due to CO2 this heat gets sent back to earth and this hits the ice-warming infrared radiation hitting arctic.

This graph shows the top countries with the largest amount of CO2 per capital.

This information was gathered from: 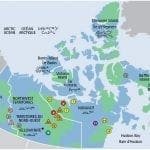