The Guinigi Tower is the most important tower in Lucca and one of the few remaining towers around the city walls, the Guinigi is an impressive 44.25 meters high tower that used to be the residence of one of the most powerful and wealthy families in Tuscany during 1300’s. The Towers was used for protection and defensive purposes, Lucca had around 170 towers during the middle Ages however only a few towers survived the last 700 years. The Guinigi Tower is a typical example of local Romanesque-Gothic architecture.

From the 13th Century the Guinigi Family, who were rich merchants and a leading family of the town, concentrated their mansions between Sant’Andrea and via Guinigi, which preserved its medieval appearance intact. The Tower of Guinigi was built out of brick with mullioned three lights and four light windows, and coat of arms, cornices, and plaques of the family was decorated on to the tower. The Tower was restored and reopened in the 1980’s.

The Guinigi Tower was donated to the local government, Lucca Town Council, by the descendants of the Guinigi Family.

Note: Tickets reduced for groups over 10 people accompanied by a guide, Children between the age of 6 and 14 years old and students, required to provide a suitable card.

Free Entry to Disabled with a guide, schools of the Municipality of Lucca and students for study reasons with Authorization.

Animals are not allowed. 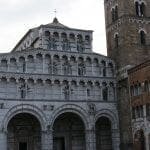