Inverness Castle is situated on view Pl and Castle road overlooking the River Ness, its known as the red sandstone castle, built in 1836 by Architect William Burn, the castle is currently still in use as a court house and no public access is allowed e.g. tourists however the Drum Tower houses an exhibition of the castle history and history of Inverness.

The first Inverness Castle was built in the 11th century however it was partially destroyed by King Robert I of Scotland and was later replaced in the 1548 castle with a tower which was built by George Gordon, who was the 4th Earl of Huntly and was later taken over by the Clan Munro and clan Fraser, who were supported by Mary Queen of Scots in 1562.

In 1410 the town was attached by Donald, Lord of the Isles and gave permissions to Alexander Steward, the Earl of Mar to rebuild the castle in 1412, As James the first wanted to stamp his authority on his northern magnates, specificity Alexander MacDonald, who was the Successor of Donald, Lord of the Isles. Alexander was arrested and imprisoned with a number of other lords and later released in 1429, Alexander, Lord of the Isles returned to Inverness with a big army and burnt the town to the ground however only a few months later Alexander submitted to James in 1429 and was imprisoned once again and James IV in 1493 ended the power of the MacDonalds In Inverness.

In 1508, Inverness Castle was given to Alexander Gordon, Earl of Huntly, it was still in the Gordon’s Family in 1562, when George Gordon, earl of Huntly defied Mary queen of Scots entrance into the castle, which encouraged a large number of forces to storm the castle. In after this situation the family kept the castle under their control.

During the Wars of the Three Kingdoms Inverness castle was part of number of actions, In 1644 it was controlled by Covenanter troops, who were given the task to defend the area against the Royalist General James Graham, Marquis of Montrose. The troops were successful defending the castle against the royalist in 1644 to 1645 and after the Battle of Auldearn on May 1645, Inverness was close to being captured however the Garrison managed to withstand the forces and Montrose withdrew.

After the Charles the first execution in January 1649, The Forces of Prince Charles the second seized Inverness Castle In February 1649 however they withdrew from the siege as the Covenanter army, led by David Leslie left the castle, The defeat of Montrose at the battle of Carbisdale in 1650 and the betrayal at Ardvreck castle ended the Campaign.

Prince Charles Stuart had arrived at Eriskay in the Outer Hebrides, and had raised an army to invaded England in November 1745, using the same road network that was built by the English to suppress the Highlands, by the end of the year the Price reached Derby having manoeuvred around the Government armies but retreated back to the Scottish Highlands shortly after. During the Second Battle of Falkirk in 1747, he was victories over the Government forces who was tracking him.  Later in the Spring the Price renewed his campaign, the three assaults he launched was against the three forts of the Great Glen, fort George, known as Inverness Castle, which fell to the rebels and so did Fort Augustus, the Jacobie’s withdrew from Fort George and ignited a number of explosions around the site, which you can still damage done to the forts, The defeat of the Jacobite’s at the Battle of Culloden, ended the rebellion.

The Fort George, known as Inverness Castle today, was destroyed by the Jacobite’s however it was later rebuilt in  new location, at Ardersier, which was eleven miles north east of Inverness and was named Fort George, the previous Fort George was renamed to Inverness Castle and was in poor condition up-to the mid Nineteenth century, until it was rebuilt to be a sheriff courthouse and country hall, which was style in Neo-Norman Style. 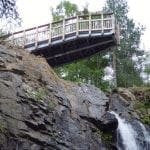