Planet HD 189733b, hasn’t got the best name for a planet, but guess we don’t know enough about it, to give it a name worth its beauty, this planet is stunning to look at, its a planet that stands out.

The planet only has one similar feature to earth;  its a blue dot that stands out in blackness, but that’s were similarities end.

The planet is the same size as Jupiter and its hotter then earth, so life on that planet isn’t likely. it goes around its host star around 2.2 Earth days.

The weather of the planet isn’t the best, lets just say you would rather stand in a wind storm on earth then planet HD 189733b, winds can blow up to 8,700 km/h, that’s 5,400 mph, which makes it 7 times the speed of sound. the planet is around 63 light years from us, so if you wasn’t planning to go there don’t worry we wouldn’t….well any time soon.

The planets blue colour is caused by light scattering off silicate particles in its atmosphere.

We have two other planets in our solar system which have that ocean blue look: Uranus and Neptune. 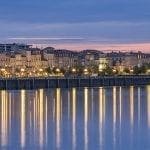