The Basilica of the Sacred Heart of Paris

The Basilica of the Sacred Heart of Paris is known as Sacré-Cœur Basilica is a roman catholic church and a minor basilica built in 1914 and dedicated to the sacred heart of Jesus. The basilica was consecrated after the end of World War I in 1919, its one of the most iconic monuments in Paris situated at the top of the Butte Montmartre, the highest point in the city, offering spectator panoramic views of Paris.

The Basilica beautiful white colour hasn’t changed despite the weather and pollution due to the travertine stone, which has an exceptional quality to preserve its colour.

The Cathedral was built to honour those who lost their lives during the French Revolution and the Franco-Prussian War and to inspire faith in the French people who lived and struggled during the hard times.

The underground crypt entrance is marked by two bronze doors on the west front. Inside the crypt are large arches, designed in austere style.  various chapels and statues can be found inside the crypt: the columns of this chapel support the apse of the basilica; the chapels is that of Saint Peter, Saint Theresa prayed in the crypt in 1887.

Climbing to the top of the Dome gives you a perfect 360° view of Paris and the surrounding landmarks, you will be around 400 meters height. The tower has one of the largest bells in France, weighing 19 tons, called  La Savoyarde.

On the Hillside park near the Basilica, you will find the perfect place to have a picnic and a beautiful view of the Sacré-Cœur.

Looking for Walk Tours in Paris, France? There are entire books with self-guided walking tours.

Funiculaire de Montmartre Cable cars are available to transport you from the base of the church grounds to the Entrance of the Basilica.

Must be registered for night adorations, to access the church after 11:00 PM. The Bell Tower is not open to visitors. Reservation is not needed for group visits.

In order to maintain silence for prayer, there are no guided tours of the interior of the Basilica. A guidebook is available in several languages at the Basilica bookshop.

Things to do Nearby

WHERE TO STAY IN PARIS

Nearby places to stay as cheap as possible budget under £100:

Nearby places to stay at a budget price over £200+:

Visiting Paris, France? We have other posts that you may enjoy that will be helpful on your trip.

Pin It For Later!

The Basilica of the Sacred Heart of Paris 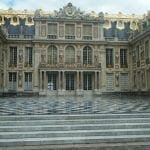