Things to do in Amsterdam

Amsterdam is a great city to visit, it has one of the friendliest environments for tourists, from art to nightlife its an experience that everyone must have even if you only there for a fortnight or a weekend.

Due to the friendliness of the place for tourists it has a I Amsterdam card which gives you access to free public transport and free access to dozens of museums and attractions.

is a science center, it was designed by Renzo Piano, it has five floors of science exhibitions and its also the largest science center in Netherlands.

strives to be one of the most innovative and interesting museums of modern art in the entire world. designed by Benthem Crouwel Architects.

Museum is named after Painter Rembrandt, who lived and worked in the house between 1639 and 1656. its a historical and art museum. the location of the museum  Jodenbreestraat in Amsterdam, Rembrandt purchased the house in 1639 and lived there until he went bankrupt in 1656.

The Museum has the largest collection of Van Gogh paintings and drawings in the world. its classed as the 31st most visited museum in the world.

the museum was opened in may 1960 and it is detected to Anne Frank, where she hid from Nazi persecution with her family and four other people in hidden rooms at the rear of the 17th-century canal house, known as the Secret Annex

Munttoren is a tower, which is one of the main gates in Amsterdam’s medieval city wall. originally build in 1480, it’s a guard-house and one of the two towers.the tower gates went up in flames in 1618 and part of the western tower remained standing, The tower was then rebuilt in Amsterdam Renaissance style in 1620.

The royal palace was built in the 17th century during the dutch golden age, its one of the three palaces build in Netherlands and is disposal of the monarch. it’s located in the Dam Square.

The biggest city park in Amsterdam, its also the most famous park in Netherlands, the located south of Leidseplein and close to Rijsmuseum, Stedelijk and van Gogh museum. also the mark has a free concerts and air theater and even bandstands. The park has other attractions such as a statue of Poet Vondel, a playground for children and a Pavilion Which has  a Restaurant vertigo.

The first large park that was laid out by municipality of Amsterdam, its located at Oost/Watergraafsmeer borough and forms. Has a memorial to Theo van Gogh

The park was named after a Jewish Doctor and philanthropist, Samuel Sarphati, the park also has a monument of him, it’s a small park.

It’s known as the Flower market and its the only floating flower market in the world, this market has been part of Amsterdam since 1862, the market is like the old traditional markets, by having stall stands on the house boats.

The market is located at Albert Cuyp street, De Pijp, and has both sides of the road covered with stalls, there are around 300 stalls in this market, the market sells everything from fruit to clothes, the market is very popular and can get crowded.

It’s a traditional market, it’s very interesting, this type of market is specially good for second-hand clothing from t-shirts to spray paints of graffiti and also unique objects from different type of countries such as Africa and Asia.

It’s known for having cheap drinks and low enter prices it popular with backpacks and plays popular music such as: Classic chart, disco & house tunes blast out at this veteran, 2-Story nightclub for students only.

It’s not known to be the classiest club in Amsterdam but it’s very popular for backpacks and students, it has cheap drinks and great music.

Known as one of the most, if not the most stylish places to go to, it has gained reputation of where ‘beautiful’ people go to and party.

A historical building which is an independent venue, provides a stage for underground and radical music, it also is run by volunteers. 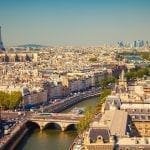 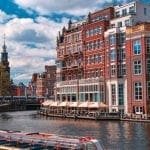